As Seen In: the Atlanta Journal Constitution 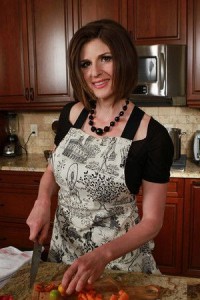 Though opening a cooking school wasn’t originally in her plan, Cyndi’s own cooking career began when she was 12. The summer of that year, her father worked from home while recovering from surgery. His business associates often came to the family’s home to conduct meetings while he was home-bound. Cyndi took it upon herself to prepare lunches for her father and his guests, relishing the positive feedback she earned.

Cyndi admits that she spent less time cooking during high school and college but honed her skills once she married. It was then that she discovered a secret: the more she cooked, the more of a break she got from other household duties. Sadly, Cyndi’s marriage hit some rough spots and she confesses that the meals she made became more elaborate as it became rockier.

After an unfortunate divorce, Cyndi relied on her cooking skills and a proclivity for public speaking to score a part-time position with the Marcus Jewish Community Center to teach cooking classes. After a short time, Cyndi doubled the size of the Center’s cooking camps and increased enrollment in the adult engagement classes. She felt that the program “blossomed into something really viable.”

She was ready to do more. After much research, Cyndi devised a plan to revamp the kitchens at the JCC and build the program into a premiere cooking school — the only kosher cooking school on the East Coast from Key West to New York. Cyndi’s vision, as it turns out, was broader than the JCC’s current plan for the program, and she considered realizing her vision elsewhere.

Frustrated, Cyndi sat down with her father for a heart-to-heart. She says, “I remember sitting across from my Dad. He got a little sparkle in his eye and said, ‘You need to do this on your own.’ He believed in me.”

Cyndi set out to do just that. She discovered the Small Business Administration and immediately began classes on starting a business. She also used its resources to locate a mentor — a retired entrepreneur, who guided her through a long and arduous process. After many months of hard work, Yes, Chef! Culinary Events was born.

In the interim while she prepares to open for business, Cyndi both leads and coordinates cooking demonstrations at the Sandy Springs Farmers Market. Here, she has formed connections with the area that is home to Yes, Chef! Culinary Events. Cyndi says she is very “excited to be in Sandy Springs because it’s all about the neighborhood.”

Yes, Chef! Culinary Events, originally “Hal’s Kitchen” and named after Cyndi’s father who passed away unexpectedly last October, will offer cooking classes and camps for adults and children, birthday parties and corporate team building events. The school will utilize the talents of Cyndi Sterne, Chef Jessica Ray, a graduate of the Art Institute of Atlanta, and other contracted instructors including Sucheta Rawal, an Atlanta-based foodie, writer and self-proclaimed “home-grown chef.”